From the earliest discussion of a labyrinth, there was an understanding that its greatest potential might be realized by engaging the whole context where it was placed.  Experiencing a labyrinth occurs not just by walking its pathway, but by doing so within the “room” surrounding it.  So from the outset, there was an effort to develop a labyrinth and surrounding garden which would both be mutually sympathetic, and complimentary to a whole experience of prayer and contemplation.  The labyrinth’s location was selected first for level topography, and then for its unique combination of close proximity to the building and peaceful separation from the activity of the main courtyard.

In order to create a more natural space, hard paving was limited to the essential elements necessary for circulation and pathway.   Sandstone was an obvious choice.  IPC’s original field stone was quarried from Shades Mountain, likely to avoid the iron ore found in much of the stone available near Red Mountain.  The closest match today was found through a quarry in Tennessee.

In developing the pathway design, available space allowed for a labyrinth of seven circuits.  While many labyrinths are circular variations of the most notable example at Chartres, the cathedral of Amiens, France, provided a similar pattern, but in octagonal form.  In exploring this direction, the octagonal shape establishes a sense of orientation that formally anchors the labyrinth to the building and garden space.   The angular corners also echo sharper geometries found in the gables and sloped parapets of the adjacent façade.  It was placed on axis with the large window at the Great Hall stair, affording an overview of the whole space from that gracious landing.  The labyrinth’s length from entrance to center-point is 415 feet, creating a round trip journey twice that distance, or about the span of three city blocks.

The remaining space is devoted to landscaping, softening the overall character of the garden.  In selecting the plantings, a balance was sought between spatial containment to provide a sense of privacy, and openness to connect the garden to its surroundings and invite those passing by as they walk between buildings on either side. In early English lore, the Hawthorne tree bears both pagan and Christian symbolism.  Its thorns are traditionally associated with Christ’s crucifixion, and its second “blooming” of a few flowers and a profusion of red berries coincides with Christmas and the Winter Solstice.  Eight of these trees encircle the labyrinth, creating a filtered canopy overhead, while their slender trunks establish limited definition at the ground.  A vertical wall of hollies and evergreens create an opaque backdrop to the north, and a lower hedge of English boxwood lines the sidewalk at Highland Avenue.  These plantings establish general boundaries, and the ground plane between is a simple lawn with dwarf mondo forming the walls between labyrinth pathways.  Benches are placed at cardinal points around the garden, accommodating more passive use of the space.

The garden and labyrinth have become a natural extension of exterior spaces developed along Highland Avenue.  Beginning with the front courtyard, the Columbarium provides more formal enclosure that links to the prayer garden through a gate intended for further expansion.  As such, the labyrinth and prayer garden are part of a sequence of distinct outdoor rooms, each with its own character appropriate to its purpose.

Ask, and it will given to you.
Seek, and you will find.
Knock, and the door will be opened to you.
(Matthew 7:7)

Part of Jesus’s final remarks in the Sermon on the Mount, William Barclay describes this passage as Christ’s “charter of prayer.”  It was also a favorite passage of Mrs. William E. Dismukes, whose vision and support for the labyrinth was critical in encouraging the congregation to embrace this recent project.   A small bronze plaque is engraved with this passage and has been placed on a stone base beside the entrance.  It is a fitting reminder that through earnest and faithful prayer, God’s Will may be revealed to us in our daily walk of life. 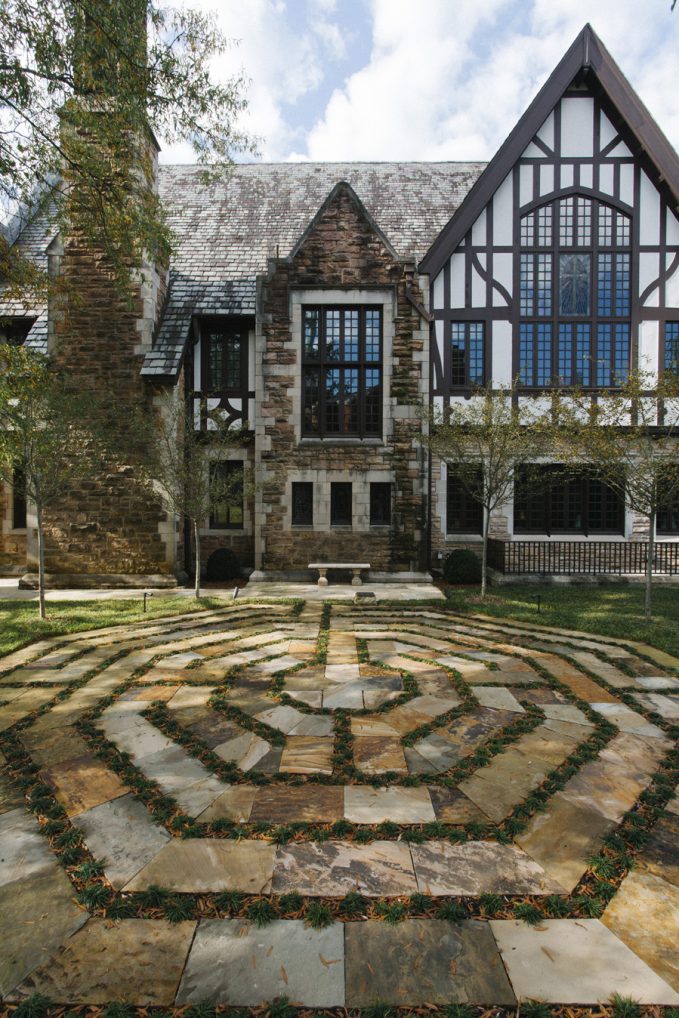 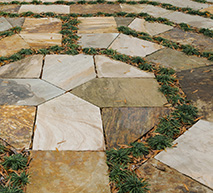 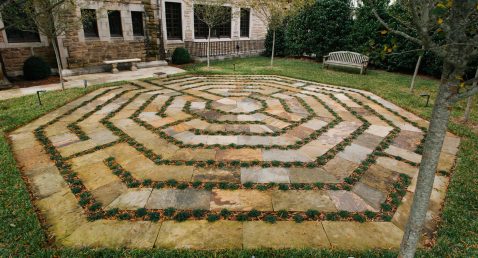